I write this from a hunting shack somewhere on the Florida-Georgia border, on the way back home after another three week stay with my family. Dad got a major back surgery and we helped mom out with the chores and live-in care.

Like many aging millennials, I began COVID with a frantic interest in my parents' well-being. When we thought it might kill them, I was eager to set aside old grievances and make another try at a healthy relationship.

I wonder how many other prodigal 30somethings now sadly remember why they stayed so far away before.

Wifey chose the stops, and she opted for two nights in BnBs to cut our daily driving down. At five hours per leg, it has been downright cushy. Tonight, on our second evening, we're deep in the sticks-- lawns full of mud-covered four wheelers; maskless convenience stores selling overstocked Trump swag. I saw a flag outside a trailer that was two flags: the stars and stripes with a white hand at the bottom, pulling up the curtain to reveal a rebel one.

The church marquee before the dirt road asked us, "Have you tested positive for Jesus?" Good trolls, just like their leader.

"Weird," my girlfriend said. "You look like a redneck, but you are so opposed to them."

Later, she walked our dog down the trail, a gentle, pudgy Beagle mix. When they got back her face was flushed. "We saw a bunch of Poochos!" she said. "They were all in cages! They looked just like him, but they were loud and crazy." He got scared when they started whelping, she said. He tried to hide behind her leg.

"Poor guy." I picked him up and hugged him, thinking of the rednecks from earlier. "Me and Poocho, so misunderstood."

We've since returned to sunny Florida, where it's finally time to party.

Soon I'll need a new excuse to stay inside.

Meanwhile, Seph News has been redesigned with another cutting-edge tech stack. (For the nerds: NextJS, Sanity, and the react-force-graph npm package). Learning to code never ends, but once you reach a cruising altitude the learning is far less painful. I think I'm pretty good now! The 'notes' section contains a network graph on each page which can be expanded to show first- or second-order children. (The graph can also be viewed for each blog post by going to the top of this page and clicking on "View in graph.") 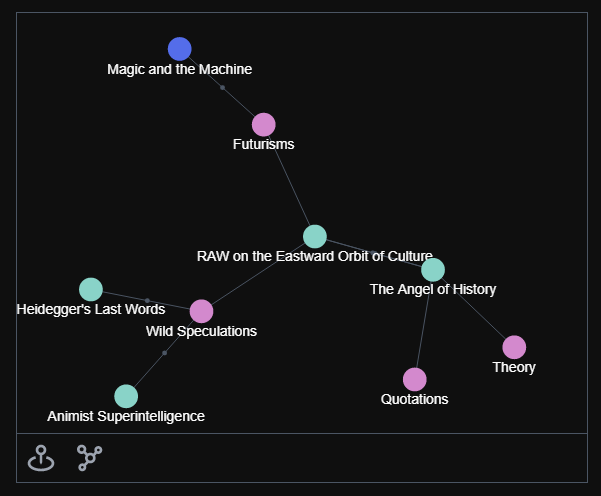 But wait, there's more! On the backend of the site, where I'm writing this, there's another graph in my content management system: 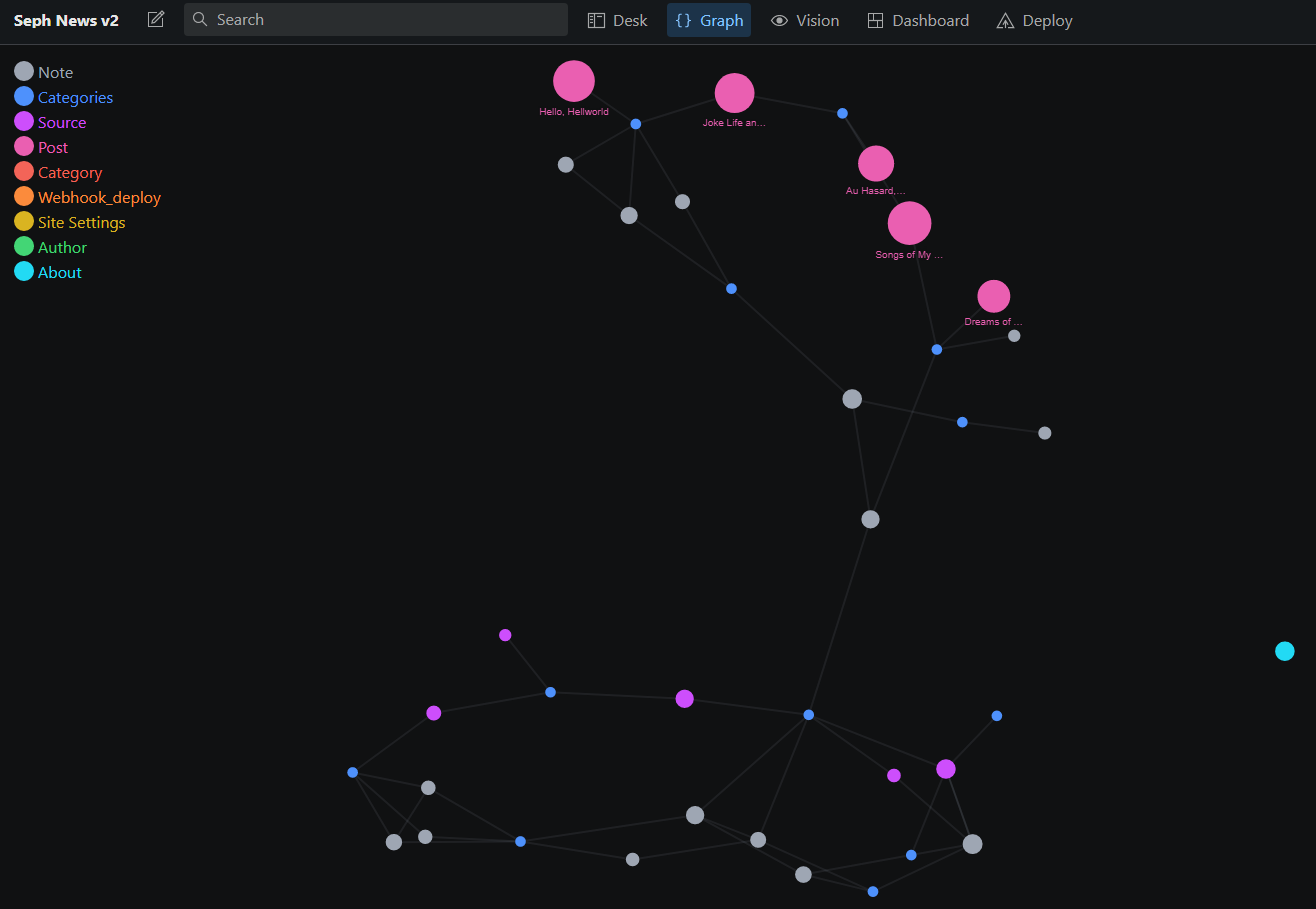 The smaller pink dot in the middle is the very post you're reading.

But wait, I've completely lost my mind! Most of my notes are actually written in Roam Research, where I made a SmartBlock hook up to a Heroku Express server to immediately send them over to my Sanity CMS. Roam, too, has a network graph. 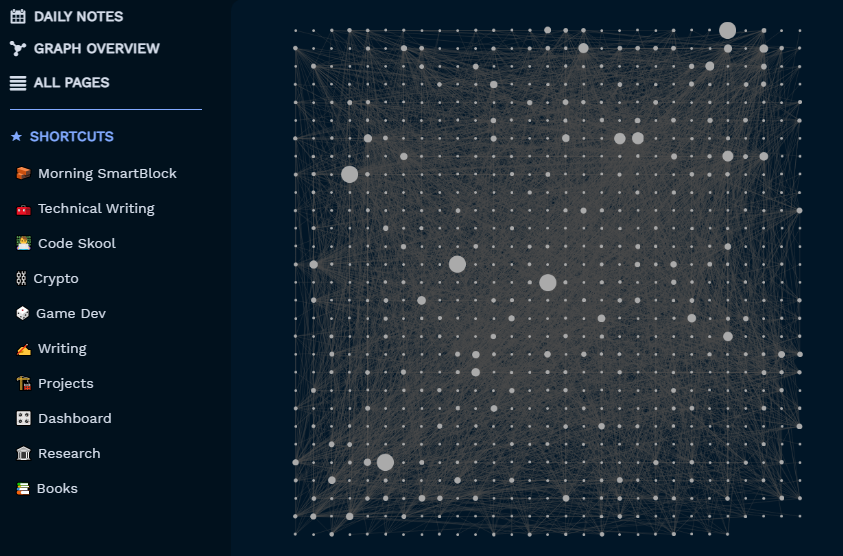 I need to go outside.

It was a lot of code to integrate-- with my sluggish left brain, it took a week just to learn the Datalog. 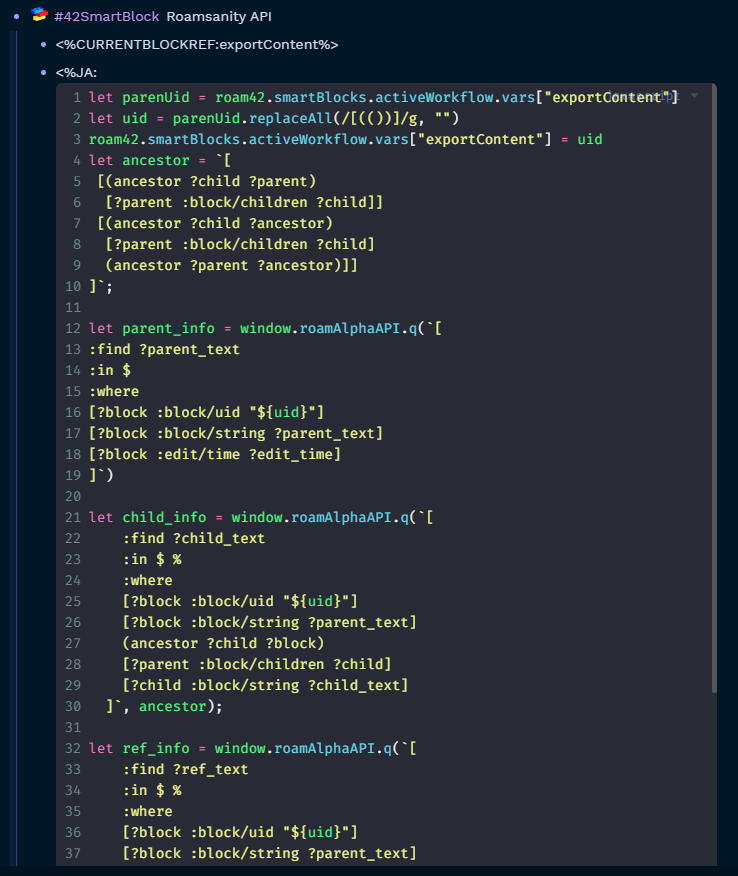 Datalog feels like speaking French-Chinese out of two mouths at once.

A SmartBlock is triggered for a note and its indented bullet points-- they hit the API with a POST request and create a new Sanity document. 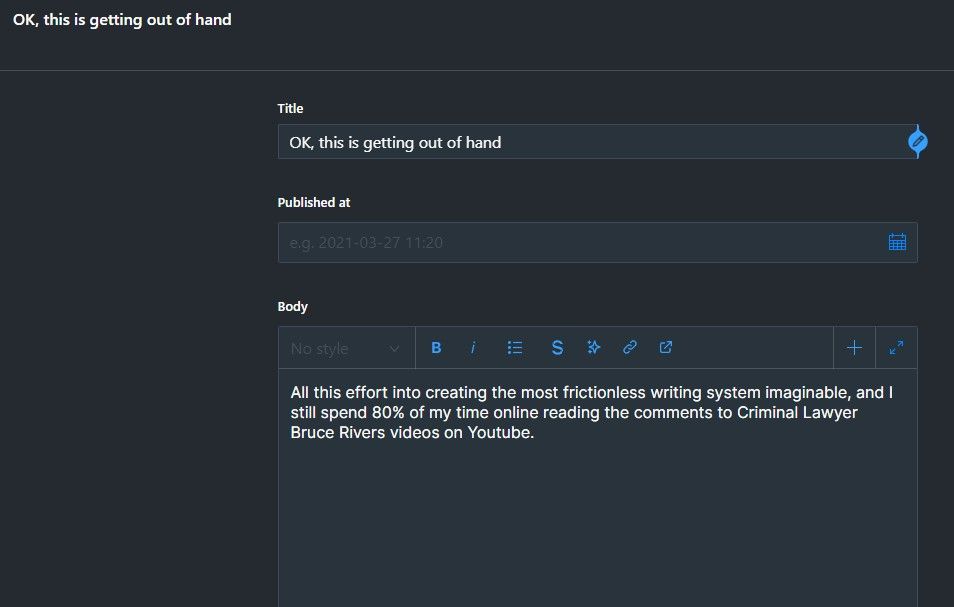 In hindsight, building this elaborate system was mostly a learning exercise. My notes section is no Borgesian library. But maybe you'll find some enlightening stuff. I'm also planning on creating a starter site so others who want a similar set-up can get one easily.

A Mania For the Network As Art

Have I spent most of the last year fetishizing network graphs and the writing softwares they enable? Obviously. "Tools for thought," the trendy software space for human thought-enhancement, is still completely fascinating to me, even if at times it seems like a vanity-metric-filled rabbit hole. In the words of Wittgenstein, "if people never did silly things, nothing intelligent would ever get done."

I checked out Mark Wigley's 2001 essay "Network Fever" recently, hoping to get some insight into the obsessives that came before me. The architectural theorist traces the origins of network thinking back to obscure 1960s counterculture conferences and the work of Marshall McLuhan and Buckminster Fuller. His tone is mostly critical.

We are constantly surrounded by talk of networks. Every third message, article, and advertisement seems to be about one network or another. We are surrounded, that is, by talk on networks about networks. It is as if our technologies feed on a kind of narcissistic self-reflection... Nowhere escapes the net.

But the silly ideas he quotes are actually pretty interesting! Take this infographic from a 1972 Doxiadis conference, shortly after the discourse had been "overwhelmed with network fever":

In 1972, Doxiadis presented photographs of a spider's web before and after the animal had been drugged with amphetamines. The distorted organization of the doped spider was compared to a map showing "the chaos of networks" in the urban Detroit area. 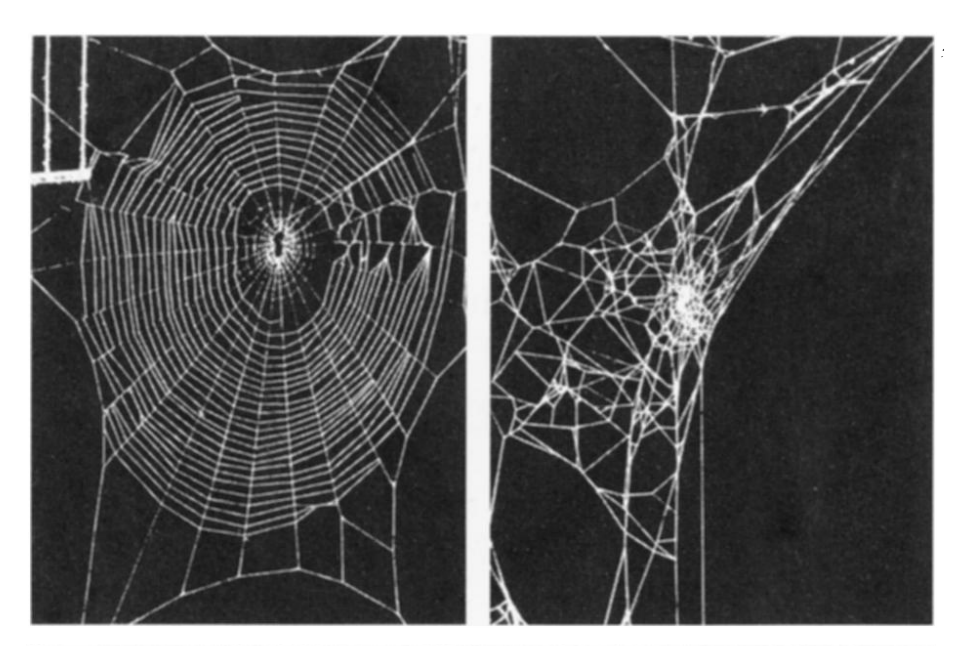 On the left, a sober spider's web. On the right, a spider on amphetamines. 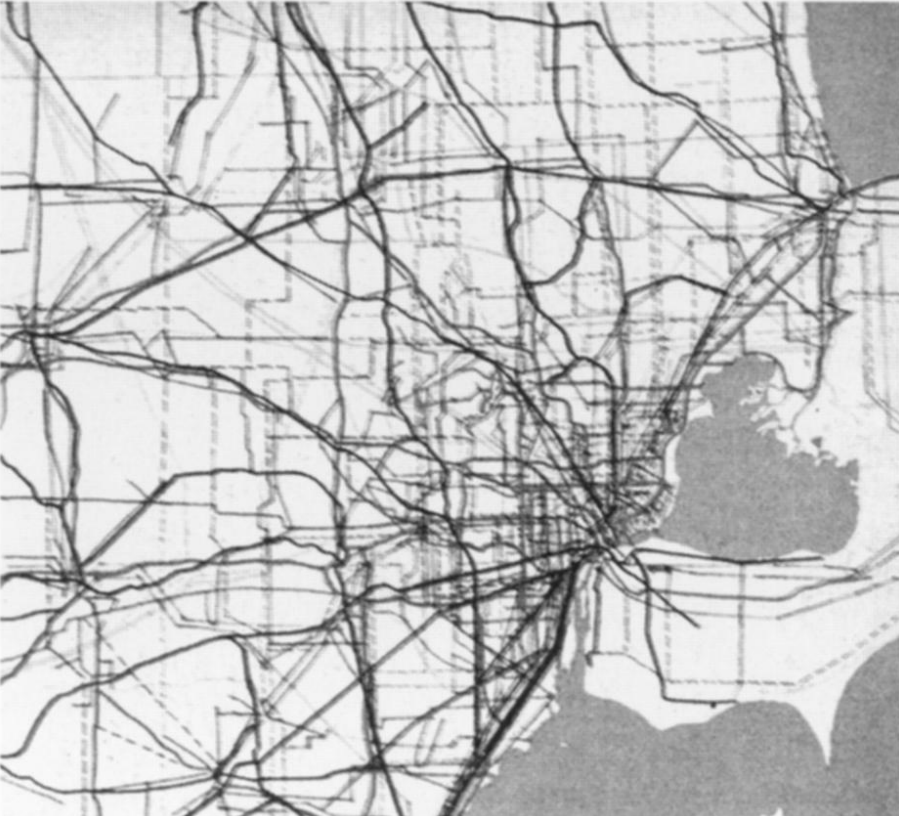 A map of Detroit roadways, presumably crafted by a tweaked-out spider.

To create healthy webs, the architect argued, we must "coordinate ALL of our networks NOW." Communication, transportation, agriculture--the graphs have got to look better!

There's a case to be made that domesticated humans are in an amphetamine-like state-- most of us are addicted to coffee, at least, and if we mapped out the global supply chain we've rushed to erect over the past couple centuries it would probably look a lot like Detroit's interstate. Our networks are not as pretty as they could be, in any case. I would know. I've got lots of pretty network graphs.

Not sure where all this leads, but it's cool to see the Doxiadis conferences still going fifty years later. This post's featured image is a Grecian palace they built a couple years ago. Here's another view, brought to you by the same folks who say we need to sober up our spider brains:

In other architectural news, the Seph family's nighttime TV lately has been hours-long binging of tiny house shows. Here's a highlight-- I want to stumble onto this woman's hut after getting lost on a long hike, get invited in and offered a suspicious tea and three wishes, then wake up on the banks of a brook the next morning with a mysterious relic in my pocket, unsure if I dreamed it all.

My current life-plan: I build a tiny eco-house, connect it to Starlink, and spend my remaining days on a cozy yurt floor with my VR headset on, building the governments of the future on a generous crypto enDAOment. At least, that was the decision last night, when I stayed up till the wee hours gorging on this great interview with polymath tech forecaster Balaji Srinivasan.

If you're interesting in joining some futurist learning experiments, Srinivasan's 1729 project offers BTC bounties to people who solve writing/coding/designing challenges via their newsletter. I'm trying my hand at them this week, and will hopefully spend the remainder of today solving some tricky programming challenges in Elixir.

Where does the number come from? It's not a historical date, though I imagine its founders were happy to connote the European revolutions of that century. It's "the sum of two cubes in two different ways." I don't know what that means either, but here's more:

Srinivasa Ramanujan was India’s greatest mathematician, and kind of like India’s Einstein, but has kind of a romantic story in the sense that he was extremely poor and wrote these letters to mathematicians around the world. He had just self-taught math from a textbook. [...] most [mathematicians] ignored him, just thought he was a crank. And one guy brought him out to England, this guy G.H. Hardy, who thought this guy has to be a genius because no one would make up these equations. 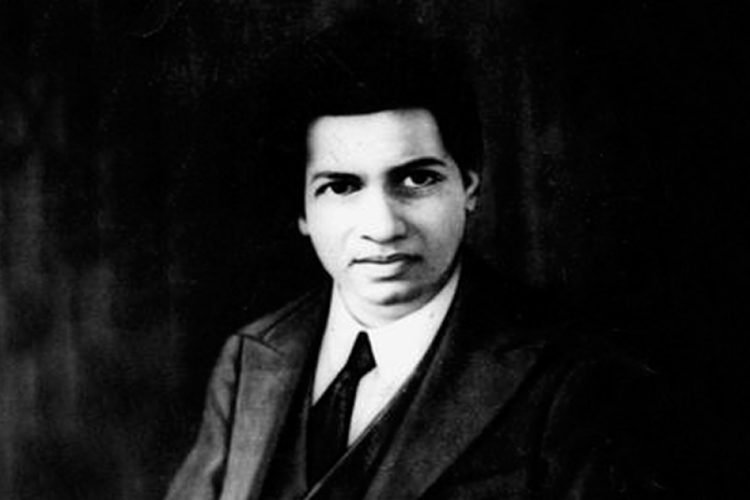 And so then Ramanujan began a rampage through mathematics and has people still to this day going through a page of his notebooks for an entire mathematical journal issue, because he just wrote down all these results that were true, but he didn’t provide the proof. You just intuit the result. So where does 1729 come from?

Ramanujan died very young, very, very young [...] On his deathbed, Hardy came in to try to cheer him up. He said, “Ramanujan, I came in on a taxi and the license plate, it’s very boring. It’s 1729.” And on his deathbed, Ramanujan still had the wit and faculty to say, “Oh, that’s not boring. It’s the sum of two cubes in two different ways.” Because he’s on a first name basis with every number, you know? And that’s kind of the legend of Ramanujan. And so, have you ever seen Good Will Hunting?

Good Will Hunting was kind of based on that.

Why is this the name of his Bitcoin dispensary/future-tech academy? Because it sends a homing beacon out to the Ramanujans of today, who hopefully will come to live longer in a more welcoming world.

We can give this skyhook to people and you can just start with nothing, absolutely nothing other than this phone, which people have made really cheap. And you can do the tutorials, you learn some skills, you level up, you get more tasks, you start leveling up more, you get digital currency. So anywhere there’s a phone, there’s a job and there’s an education and this is what I plan to do with what I’ve been fortunate enough to make, and that’s my contribution to humanity, I think, or hope it to be.

I support this mission.

On a strategic level, if you're trying to get the jump on the imminent end of Pax Americana, helping folks in the global south "leapfrog" with a 4D chess move like this seems like a wise strategy! It reminds me of Sugatra Mitra's Hole in the Wall experiment. In the slums of India he installed public, outdoor computers and let the kids figure it out. This video is two minutes and worth watching.

Imagine what these could do if they were everywhere: Kenya, Syria, the slums of Detroit-- or for that matter, the trailer parks of the Florida-Georgia border.

Whether or not I find a way to interact with the 1729 project (or solve those Elixir problems!), it feels good just to get excited about it.

I've been "holding the lotus to the stone" these many months, like so many others across the world, retreating from the outside in my little room with my little laptop and searching for some trap door in this screen that could set me free. I have not found full liberation yet, but slowly a path is appearing. I have joined a shitposting guild on Twitter at least, that's gotta be a good sign.

Feel free to DM me if you want to try out for our role-playing X-men groupchat (it's slightly cooler than it sounds). The last time I role-played on the internet I was twelve years old, in an AOL message board called RhyDin, 21 years ago. In a shocking plot twist, they're still around-- an exciting topic for another time.

Anyways I hope you, dear reader, are coming full circle in your own timeline as well. I'll try to stay better in touch.