A few weeks ago, on the verge of finally going stir-crazy, my girlfriend and I decided to spend a few weeks in my parents' basement up north. My parents and I are usually a bit too squabble-prone to cohab together, but desperate times call for getting out of the apartment, and my folks were lonely too. She and I rushed to pack our bags, stashed the dog and cat in the backseat, and set off northward on a two day road trip through the southeast.

We left our small Republican city in Florida around 8am. On our way to the interstate, sun still breaking over the skyscrapers and tops of yachts, we were greeted by a massive roadside protest-- at least a hundred senior citizens, bedecked in their finest Americana, honking and waving flags in support of Joe Biden.

We laughed at how early they must've assembled. Typical. It was hard to imagine the interloper crusties we'd marched with in June getting up at daybreak for social justice. It was a good omen for our trip, we agreed, that this deep in trashy rich folk culture there were still a sizeable number who didn't support our trashy-rich Florida Man in chief.

But a few hours into the heartland of the panhandle, in the red zone of America's fever dream, the signs of course got worse. Like most people with a memory, I wince when the latest polls announce an overwhelming victory for Biden. Down in Floribama, it was Donald Trump or nothing.

Every roadside farm seemed eager to outdo the last one. Most had two or three campaign approved signs, but more impressive were the DIY banners of the True Believers, who painted "VOTE TRUMP" in red paint on plain plywood, hung on their mailboxes or leaned against the side of their fence. It was miles and miles of this, with hardly a house unbranded. Alachua County seemed ready to secede. In the more trucker-frequented causeways, someone had rented out a dozen billboards that read "ONLY GOD AND DONALD J. TRUMP CAN SAVE OUR COUNTRY."

I'd thought I cured most of my Trump Derangement Syndrome over the course of the year, force-watching conservative Youtube shows as a kind of Ludovico treatment after the infowars of the protests almost made my head explode. But this barrage of advertising brought the rabies out of me all over again-- I was back in high school, outnumbered by psycho redneck assholes, palm-sweat slicking the sides of the steering wheel. My attempts at galaxy-brained indifference had fallen flat. I still absolutely hated Donald Trump. 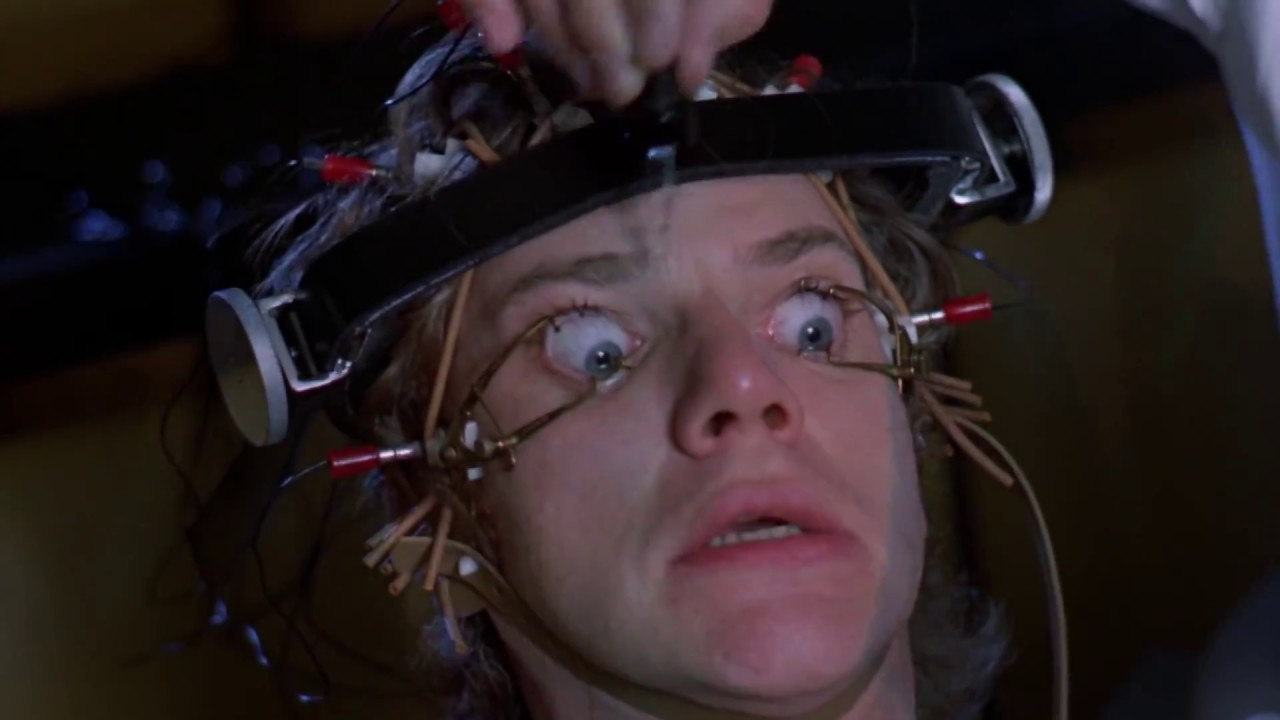 Me watching Louder With Crowder circa mid-July.

We got out to pump gas in a barren, too-quiet microtown where a motorcade was starting a block up from the gas station. A handful of motorcycles, "Bikers for Trump," led truck after truck to rev out onto the state road, "NO MORE BULLSHIT" waving in their beds. We were parked next to a car with New Jersey plates. I sighed and shook my head then glanced his way, hoping for a moment of camaraderie. He was staring at the ground.

A day later we were crawling up I-95 a little north of Richmond, where suburbanites commute hours each day to get to the well-paying jobs near DC. It makes them awful drivers, cutting triple lanes of traffic to inch ahead of one another, desperate to spend an hour or two before bed outside of their car. We let a swarm howl ahead of us only to slam the brakes a few minutes later, stuck in standstill traffic. The map app reported a crash.

Sure enough, thirty minutes later we passed a Kodak moment flanked by firetrucks and highway patrolmen: one economy Ford with three of its four airbags deployed, its rear end crunched against a barricade, and a Cadillac with Trump flags flying above each of its windows, ass up and nose into the forest about a hundred feet from the shoulder.

The Hangovers of the Joke Option

It reminded me of an article I read in January, "The 'Where's My Elephant?' Theory of History" at the now-defunct The Outline. Author Tom Whyman chalks up our current problems to a series of pranks gone wrong.

1) If you give someone a joke option, they will take it.

2) The joke option is (usually) a joke option for a reason, and choosing it will cause everyone a lot of problems.

3) In time, the joke will stop being funny, and people will just sort of lose interest in it.

4) No one ever learns anything.

He describes a dinner table discussion with his dad, where dad proposes two overarching views of historical causality: in one, a conspiracy of elites construct events to serve their powerplays. In the other, "the cock-up theory," history is made up of mistakes made by incompetent actors. Dad subscribes to the second theory, using it to critique leftist utopianism, and contrast it with the more realistic worldview of the conservatives. Whyman proposes a third option.

The “where’s my elephant?” theory takes it name, of course, from The Simpsons episode in which Bart gets an elephant... Bart wins a radio contest where you have to answer a phone call with the phrase, “KBBL is going to give me something stupid.” That “something stupid” turns out to be either $10,000, or “the gag prize”: a full-grown African elephant. Much to the presenters’ surprise, Bart chooses the elephant — which is a problem for the radio station, since they don't actually have an elephant to give him.

After an episode's worth of hijinks, Bart manages to secure the elephant, but wildlife maintenance in his backyard is a lot less fun than trolling the radio station. "Bart has won his joke prize," Whyman writes, "but now he must deal with the joke's consequences."

Citizen Kane in an Election Year

The featured image is from Citizen Kane, which I watched a couple weeks ago, curious what light it might shed on the awful now.

The still is taken from Kane's election failure-- as the owner of a giant news corps, Kane has two headlines ready for the day after the election: one in which he wins, and the other in which there's a "fraud at the polls."

There are more similarities from there: Kane is born into wealth but remains an outsider to the wealthy establishment. The core campaign promise in his bid for governor is to arrest the incumbent. He's vulgar in a way that working people relate to. It's startling how simple the playbook is.

As usual, the Youtube comments are the source of much enlightenment. 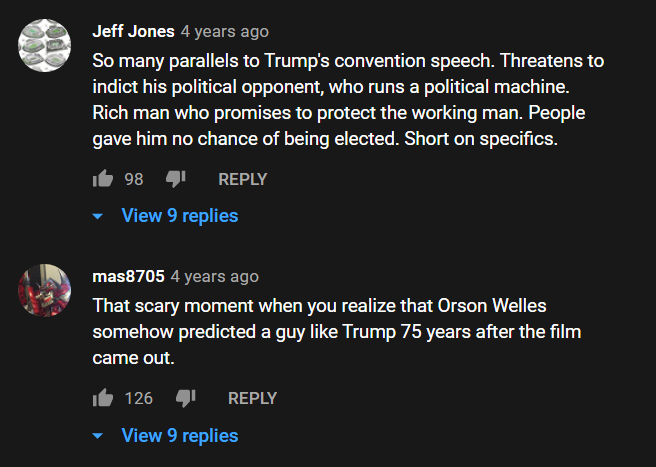 The similarities end, though: Kane is defeated due to scandal.