I don't remember how, but I signed up for a 'hackathon' a couple weeks ago, my first ever. InterHackt, it was called, and it was a week-long design sprint centered around "the future of interfaces." I had no idea what I was doing when I registered, and even less once I finally got to work, but it ended up being a really great time and I was proud of the thing I created. 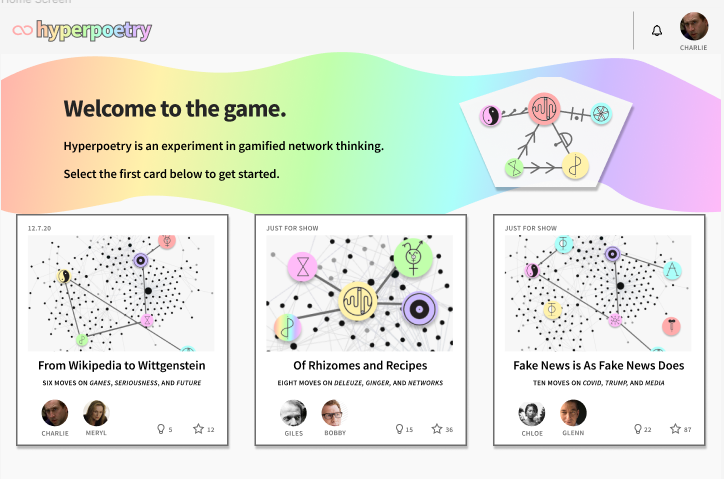 Hyperpoetry is an experiment in gamified network thinking.

You can check out my prototype here. It takes a while to load-- you could probably read the rest of this post while you wait.

The game involves two players trading quotes and other references back and forth, which link to each other in visually expressive ways. 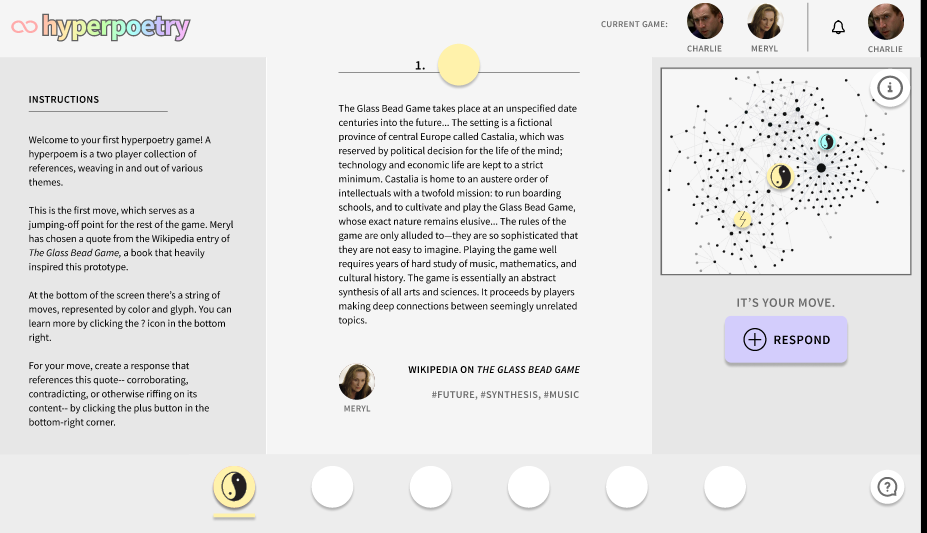 Move one, by Meryl Streep.

By the end of the game, each reference is joined with the one before it until a pretty string of colored glyphs is created by the players: 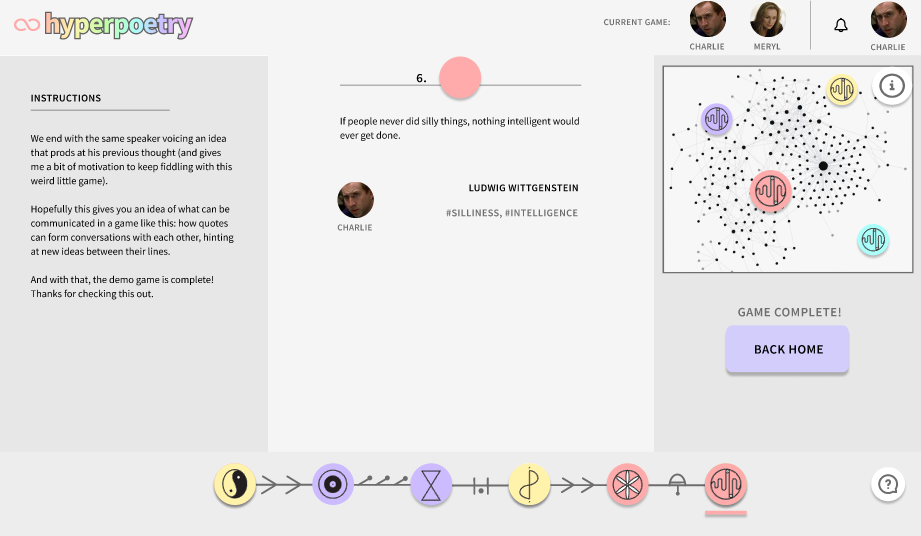 My early sketches centered around a couple airy inklings: I'm fascinated by tools for thought and networked note-taking software, but their attempts to create an all-encompassing "second brain" of interconnected ideas can be overwhelming. How could networked knowledge graphs be simplified, while still retaining their beauty?

A day or two into the project I ended up melting this idea into a pet fantasy I've been keeping for at least a decade: The Glass Bead Game by Herman Hesse was a transformative book for me in my early 20s. It centers around a futuristic society where the creative arts have long since been replaced by a gamified, self-cultivative scholarship. People play the game by making references back and forth to things they've read, elaborating various themes across all dimensions of human knowledge. From the Wikipedia:

The Glass Bead Game takes place at an unspecified date centuries into the future.. The setting is a fictional province of central Europe called Castalia, which was reserved by political decision for the life of the mind; technology and economic life are kept to a strict minimum. Castalia is home to an austere order of intellectuals with a twofold mission: to run boarding schools, and to cultivate and play the Glass Bead Game, whose exact nature remains elusive and whose devotees occupy a special school within Castalia known as Waldzell. The rules of the game are only alluded to—they are so sophisticated that they are not easy to imagine. Playing the game well requires years of hard study of music, mathematics, and cultural history. The game is essentially an abstract synthesis of all arts and sciences. It proceeds by players making deep connections between seemingly unrelated topics.

I've always wondered how to make this vague, wide-ranging plot device into a playable game. There are other attempts online to draw from: GLASS BEAD GAMES – An Infinite Game Playground was especially helpful. Using their glyphs, I made pretty little alchemical symbols that correspond to each move. The prototype has a sample game that uses them. It's played between Charlie Kaufmann and Meryl Streep and they talk about Ender's Game, television tropes, and Wittgenstein.

My submission was voted "Most Creative" by the participants, which was a much-needed hit of love and validation in this long winter. So now I have a smooth $250 and a Leap Motion Controller in the mail. #feelsgood.

There are a lot of other impressive, forward-thinking projects on the Interhackt website (though I don't know how long they plan to leave the site up, and it might be broken by the time you read this). I'm glad I went through with the hackathon and would definitely sign up for something similar again. In the last two days of the sprint I stayed up crazy late and clocked 10+ hours at the computer, doing ye olde maniac burnout routine. I miss it! I left the contest convinced that mildly self-destructive creative marathons are one of the sweetest joys of my life, and I need to make more time for them going forward.

If you dig what I worked on, or have any other cool ideas in the realms of cybernetic thought-enhancement, send me a Twitter or sign up for my newsletter below.