RhyDin was a message board role-playing world on AOL in the 90s and early 2000s. From a Second Life message board:

If you ever had AOL back in the day and were a role-player then you probably ended up in the Rhy'Din rooms at some point. The role play in those rooms became tangible - you could smell the wood of the beams mingled with spilt ale in the taverns and could hear the breeze moving through the oak trees in the forests. The characters were my family and my friends, but eventually everyone grew up or went to college, killing off characters and bringing story lines that had been ongoing for a few years, to an end. 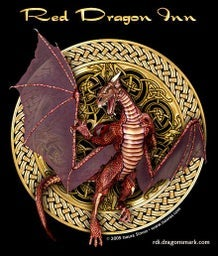 There are a few sites alive in 2021 that remember RhyDin-- a Facebook group for reminiscing about its glory days, a new message board.

What's different about something like RhyDin when compared to, say, World of Warcraft is that there are no rules in the former, nothing especially game-like at all. Everyone involved in writing improvised fantasy stories that depend and cooperate with everyone else's.

As long as you are expressing your creativity through interactive role-play and you are enjoying yourself through this challenging exercise of your imagination you are a winner.

Though characters can die or get hurt (physically or emotionally) there are no losers. You win simply be experiencing the power of your imagination and the creativity of those you play with...

At times it can be useful to look at Free Form role-play not in terms of story-lines, plots and adventures but a ongoing saga developed by character interaction.

I was really into these worlds when I was 11 and 12. I mostly forgot about them when I started skateboarding.

Of Starlinked Huts and Network Fevers

Anti-Redneck Redneck Club I write this from a hunting shack somewhere on the Florida-Georgia border, on the way back home after another three week stay with my family. Dad got a major back surgery an...